iPad Pro Expands the iPad Line… and the iPad Screen 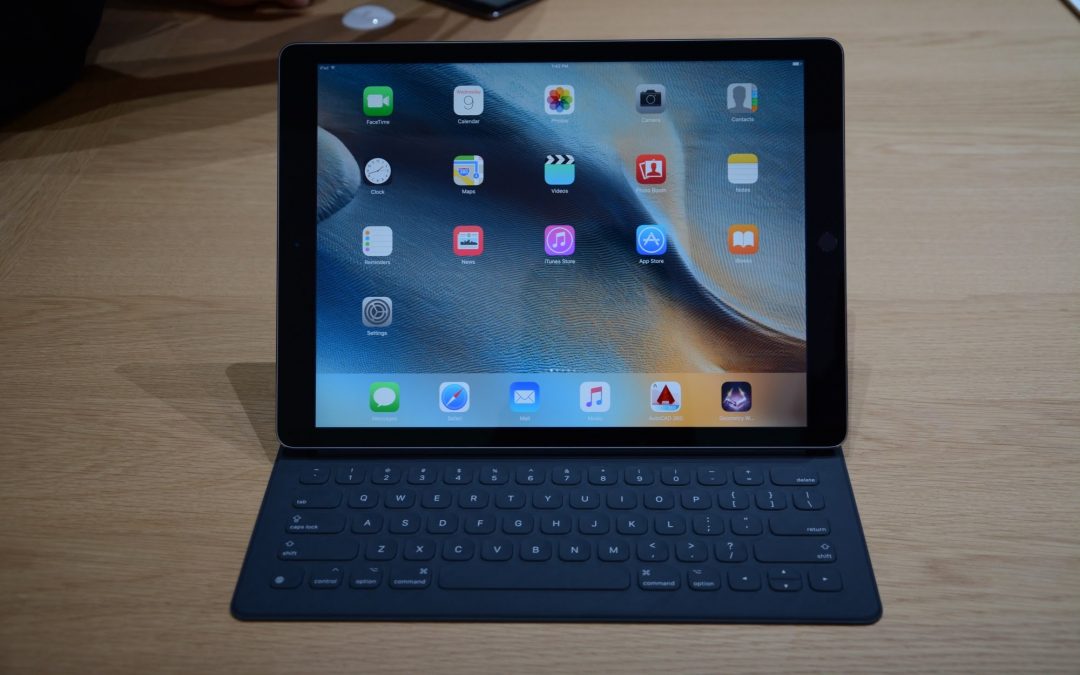 It seems that Tim Cook has been taking business advice from Goldilocks and the Three Bears, given how Apple keeps releasing iPads in different sizes. The original 2010 iPad featured a 9.7-inch screen that has remained consistent through today’s iPad Air 2, but in 2012, Apple added the iPad mini with a 7.9-inch screen that still graces the iPad mini 4. In late 2015, they were joined by the papa bear—the iPad Pro, which boasts a massive 12.9-inch display that makes it a more interesting device for those looking for more screen real estate. And that’s in a package that just a hair thicker than an iPad Air 2 and a tad heavier than the original iPad’s 1.57 pounds.

But the iPad Pro isn’t just about the bigger screen. Apple also released two new iPad Pro peripherals: the Apple Pencil and the Smart Keyboard. Steve Jobs may have mocked the concept of a stylus, but the Apple Pencil and iPad Pro work together to provide precise motion, location, tilt, and force data. That’s a fancy way of saying that this is the best stylus ever for drawing, painting, or just writing on an iPad. The Apple Pencil runs for 12 hours on a charge and recharges via a Lightning port on its top. Alas, it doesn’t have an “eraser” on top, like styluses on some other platforms.

The Smart Keyboard integrates a keyboard into Apple’s Smart Cover and connects to the iPad via the new Smart Connector, a magnetic interface that transfers both power and data. This direct connection means that no squirrely Bluetooth connection is necessary. The one odd thing about the Smart Keyboard is its fabric covering, which results in an unusual feel. Be sure to stop in the store to try one before buying it.

Apps need to be updated to work fully with the Apple Pencil, and to take advantage of the new multitasking features of iOS 9 that were created with the iPad Pro in mind: notably, the Slide Over view that gives you a glimpse of a second app in a right-hand sidebar, the Split View mode that lets two apps share that large screen fully, and the Picture in Picture view that lets you use one app while video plays in the corner. Make sure the apps you want to use support these new iOS 9 features and the Apple Pencil before making the jump.

Three models of the iPad Pro are available, a 32 GB unit with Wi-Fi, a 128 GB model with Wi-Fi, and the top-of-the-line option that combines 128 GB of storage with both Wi-Fi and cellular connectivity. Which of these will be just right for you depends on your situation, but note that the price of a 128 GB model with a Smart Keyboard and Apple Pencil is in the same ballpark as the low end of Apple’s MacBook, MacBook Air, and MacBook Pro notebook computers. The decision of whether an iPad Pro will be better for you than a Mac hinges on the apps you use, and the tasks you need to perform. In short, it’s a discussion, so come talk to us.

Twitter: Apple’s new iPad Pro boasts a big screen, Apple Pencil Stylus, and Smart Keyboard. But is it for you? Read more at:

Facebook: Apple’s new iPad Pro boasts a huge 12.9-inch screen, and has a pair of peripherals that make it the most productivity-focused iPad yet: the Apple Pencil stylus and the Smart Keyboard. If you’re an iPad fan, it might be the best iPad yet, but it’s comparable in price to the low end of Apple’s MacBook, MacBook Air, and MacBook Pro notebook computers, so deciding which is best for you requires more info and discussion. Start here: